The Instituto de Crédito Oficial (ICO), through AXIS, the venture capital subsidiary of the ICO Group, has today launched the largest call of Fond-ICO Global with an amount of up to 750 million euros to be invested in the 15 funds it selects in the categories of Technology Transfer and Incubation, Venture Capital and Expansion. 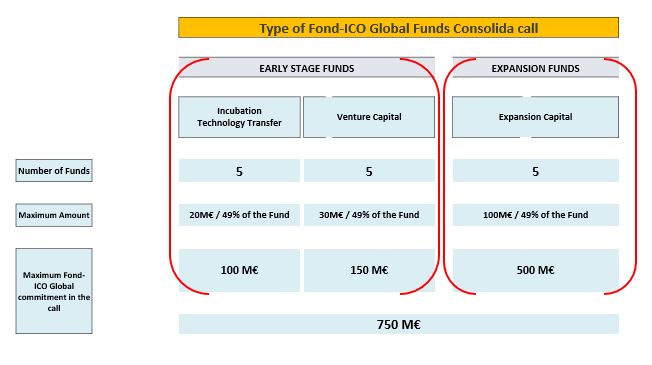 New features of the Consolida call

The Consolida call is the 14th since the creation of Fond-ICO Global. This round introduces several new features to enhance the capacity to mobilise resources in public-private partnerships aimed at consolidating the growth of Spanish companies at all stages and helping to consolidate recovery.

These new features will make it possible to quickly implement a scalable measure based on the resources, structure, experience and advice of Fond-ICO Global and its asset manager AXIS.

In this call, the amounts and percentages of Fond-ICO Global's participation in the selected funds have been increased to 49% in all categories, thus facilitating the creation of larger funds and encouraging investment in a greater number of Spanish companies.

In the expansion category, funds in which Fond-ICO Global participates must invest at least 70% of their resources in Spanish companies, thus increasing the mobilisation of funds towards medium-sized companies to boost their growth in this period of recovery.

In the more early-stage investment categories, incubation and technology transfer are grouped into a single investment strategy in order to increase flexibility and broaden competition.

The date for managing bodies to submit the documentation for the “Consolida call” is 19 October 2021, with the resolution and selection of funds by AXIS expected before the end of the year.

In the 13 Fond-ICO Global calls to date, 108 funds have been selected in which up to 2,266 million euros will be invested. It is estimated that the knock-on effect created, along with private sector investments, will allow 8,892 million euros to be injected into Spanish companies and a total of 27,245 million euros in resources to be mobilised.

With this call, ICO, through AXIS, is taking another step forward in its strategy of promoting complementary financing channels to help consolidate the economic recovery, supporting the development of the entrepreneurial ecosystem and the growth of Spanish companies.

In this line of action, AXIS and the Secretary of State for Digitalisation and Artificial Intelligence launched Fond-ICO Next Tech in July, aimed at promoting the development of high-impact digital projects and consolidating the growth of scale-ups. The objective of Fond-ICO Next Tech is to mobilise 4 billion euros of joint public-private partnership resources (half public funds and half private investment) over an initial period of four years.

Axis works in public-private partnerships with the venture capital industry in all areas of activity and currently has commitments to manage up to 7.15 billion euros in its four funds: Fond-ICO Next Tech, Fond-ICO Pyme, Fond-Ico Infraestructuras ESG and Fond-ICO Global, which would allow for a combined mobilisation of over 15 billion euros in public and private resources over the next five years, depending on the private sector's capacity to absorb resources and deliver projects.