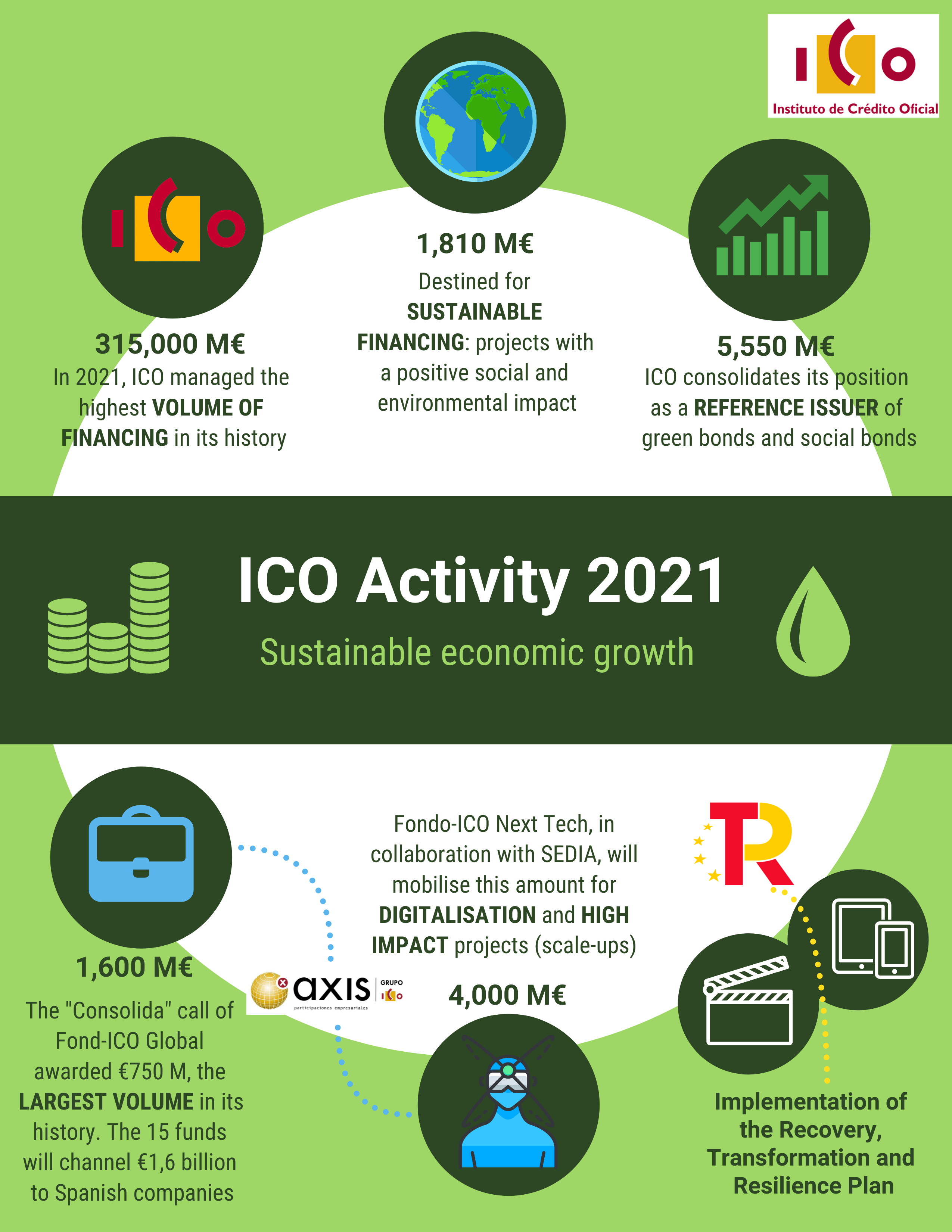 In its triple function as a national promotional bank, financial instrument of economic policy and financial agency of the State, Instituto de Crédito Oficial (ICO) focused its activity on mobilising financing for the business network to strengthen its solvency and underpin the recovery, which has led to the management of 315,000 million euros in financing in 2021.

This volume, 4.3% higher than at the end of 2020, marks a new record in ICO's history, thanks to the financing mobilised through the Ministry of Economic Affairs and Digital Transformation's Guarantee Lines, other programmes managed by ICO in its role as a financial agent of the State, as well as the activity generated by the catalogue of products that the Institute - from its balance sheet - makes available to the self-employed and companies to boost their activity and growth.

Since the health crisis was declared in March 2020, ICO has worked to deploy and manage the measures approved by the Government to mitigate the economic impact of COVID-19 and bolster business solvency to consolidate the recovery, while maintaining its usual activity, improving and expanding its own financing products to adapt them to the needs of the self-employed, SMEs and companies in the different scenarios.

Of the total credit activity managed, 32.8% corresponds to the amount guaranteed by the State through the COVID-19 Guarantee Second-Floor Facilities. Thanks to an unprecedented public-private collaboration scheme, these programmes mobilised, in 1,148,187 operations, over 135,382 million euros in financing to the productive fabric to 31 December. This is approximately 20% of the total financing granted to companies throughout the financial system in 2020-2021.

In parallel to the management on behalf of the State of the COVID-19 Guarantee Lines and the measures to strengthen business solvency approved by the Government to make the terms and conditions of these programmes more flexible, the Institute has continued to work to add value and complement these measures with its own catalogue of products (charged to the ICO balance sheet).

Thus, in the area of direct financing, ICO has focused its activity in 2021 notably on promoting sustainable projects from both a social and environmental point of view, in line with its Sustainability Policy -approved in 2020- and the Recovery,
Transformation and Resilience Plan.

During the year, ICO approved operations amounting to 2,531 million euros under the direct financing programmes, in collaboration with other financial institutions, for medium-sized and large companies. Of this amount, 57% of the total -1,463 million euros - was allocated to projects that boost the green transition. Operations approved with a positive social impact amounted to 347 million euros, bringing the total amount of direct sustainable financing approved in 2021 to 1.81 billion euros.

In turn, ICO’s Second-Floor Facilities financed 11,000 operations amounting to 1,035 million euros. In terms of the contribution to economic development and cohesion between territories, it is particularly noteworthy that 76% of the volume channelled through these lines went to companies located in regions with a per capita income the national average and that 42% of this volume financed the self-employed and SMEs located in regions with a lower than average unemployment rate. These programmes have been a benchmark in the public-private partnership model for decades, with ICO designing the products and providing the funds. Meanwhile, the banks are in charge of marketing the facilities, thus providing the capillarity that characterises these programmes.

In 2021, ICO continued to promote instruments to enable companies to diversify the sources from which they obtain financing, offering different solutions linked to the acquisition of project bonds and corporate bonds issued by Spanish companies, prioritising those certified as responsible issuers or listed on sustainability indices. It also continued to invest on the Alternative Fixed Income Market (MARF), acquiring bonds and promissory notes of medium-sized companies to help cover their liquidity needs and promote their growth. In total, ICO has injected 414 million euros into the business network through these programmes.

It is also worth noting the efforts it has made to broaden the focus of these actions to include smaller companies. One of the highlights is the participation with up to 150 million euros in the Aquisgrán fund, an entity promoted by the Mutual Guarantee Societies (SGR by their Spanish acronym). This vehicle will issue bonds in the MARF that will be acquired by ICO so that the SGRs can finance SMEs, the self-employed and entrepreneurs. This is a pioneering initiative in Europe, supported by the European Investment Fund (EIF).

Furthermore, ICO continues to be a benchmark in promoting the international activity of Spanish companies and actively contributes to the Strategy for the Internationalisation of the Spanish Economy 2021-2027. In 2021, it injected 1,041 million euros into the business fabric in loans, guarantees and sureties to boost the expansion of Spanish companies in third markets.

On-balance sheet lending at 31 December 2021 stood at 18,391 million euros, to which an additional 528 million euros in project guarantees should be added, representing, in terms of stock, 3.93% of the total financing granted by the financial sector to companies with a term of over 1 year in 2021.

On-balance sheet lending at year-end was 12% lower than in 2020. This decrease is due to the lower activity of ICO Second-floor Facilities, whose demand -mainly from the self-employed and SMEs- has shifted and is fully covered by the Guarantee Lines. In addition, it should be noted that in 2020 drawdowns on direct financing operations reached an all-time high to cover the liquidity needs of larger companies in a highly uncertain context, a demand that moderated in 2021 as activity recovered in most sectors and economic growth took hold.

In 2021, ICO also worked intensively through AXIS, its venture capital subsidiary, to foster the growth of companies and projects that combine innovation and entrepreneurship. Two milestones in this area stood out: the launch of the largest round, called "consolida", of Fond-ICO Global and the creation of Fond-ICO Next Tech.

The "Consolida" call of Fond-ICO Global, the fourteenth since the creation of this instrument, allocated 750 million euros -the largest volume of all rounds- in fifteen funds that will channel, complementing Fond-ICO Global's contributions with those of private investors, approximately 1,600 million euros to Spanish companies.

The ICO Group once again demonstrated its ability to adapt in order to contribute to the transformation of the business network with the launch of Fond-ICO Next Tech in collaboration with the Secretary of State for Digitalisation and Artificial Intelligence (SEDIA). This vehicle seeks to mobilise up to 4 billion euros in public-private partnerships to foster the development of innovative, high-impact digital projects and investment in scale-ups by strengthening public financing instruments, attracting international funds and boosting the venture capital sector. The aim of this fund is for these Spanish scale-ups to find the financing they need to stay in our country and generate quality employment.

ICO as channeller of EU funds

Since its accreditation as an Implementing Partner for the delegated management of European Commission funds in 2020, ICO has been working hard to provide Spanish companies with the best options for accessing EU initiatives.
Of particular note are the actions carried out in the CEF-T (Connecting Europe Facility Transport) programme, which encourages the participation of private sector investors and financial institutions in projects that contribute to the environmental sustainability and efficiency of the transport sector in Europe. In the first call of this programme, as an Implementing Partner, ICO - in collaboration with MITMA (Ministry of Transport, Mobility and Urban Agenda) - managed the presentation of ten projects by Spanish companies, which were awarded 32 million euros in European subsidies, representing 10% of the total allocation of this initiative for all EU countries. In addition to submitting the projects to the European Commission, ICO completed, under a blending scheme, the subsidy received by the projects with a loan, mobilising a total of 263 million euros.

To carry out its business financing activity, ICO issues debt in the capital markets, where it raised medium- and long-term funds amounting to 5,765 million euros in 2021.

The highlight of the year was the two public transactions in sustainable format. On the one hand, in June, ICO launched its third 500 million euro green bond in November, its eighth social bond for a similar amount. With these two operations, ICO has consolidated its role as a benchmark in the sustainable bond market at the European level, with an amount of 5,550 million euros issued in 11 transactions (eight social and three green).

The 11 operations supported projects with a positive social and environmental impact: the eight social bonds financed 64,200 operations that in turn generated or maintained 406,000 jobs, and the amount raised with the three green bonds was channelled to 22 projects that avoided 578,000 tonnes of CO2.

In 2021, ICO has worked to contribute its know-how and capacity to generate new products, together with the relevant ministries and agencies, to the deployment of initiatives included in the Recovery, Transformation and Resilience Plan with the aim of boosting the Spanish economy's green and digital transition. Specifically, in the last quarter of the year, in collaboration with MITMA, the Institute launched two facilities: one aimed at promoting sustainable mobility projects with 1.4 billion euros and another aimed at promoting energy efficiency improvements in buildings with 1.1 billion euros.

In addition, ICO renewed and increased to 100 million euros the amount of the agreement with RTVE to finance the production of Spanish short films, feature films and series, one of the objectives established in the Spain Audiovisual Hub Plan.

With the roadmap set by the Recovery, Transformation and Resilience Plan and the EU's Multiannual Financial Framework 2021-2027, ICO focuses its 2022-2027 Strategy on the development of programmes and actions that contribute to boosting the green and digital transformation of the Spanish economy's growth model and business network, facilitating the transition of all companies of all sizes in all sectors of activity.

** ICO's own resources are of the highest quality (Capital and reserves organically generated).

* ICO's activity within the framework of its direct financing programs. Does not correspond to the ICO COVID-19 Guarantee Line.

*** ICO's own resources are of the highest quality (Capital and organically generated reserves).