ICO collaborates with other international organisations and institutions that share the mission of supporting sectors that contribute to the development of key industries in the economy. 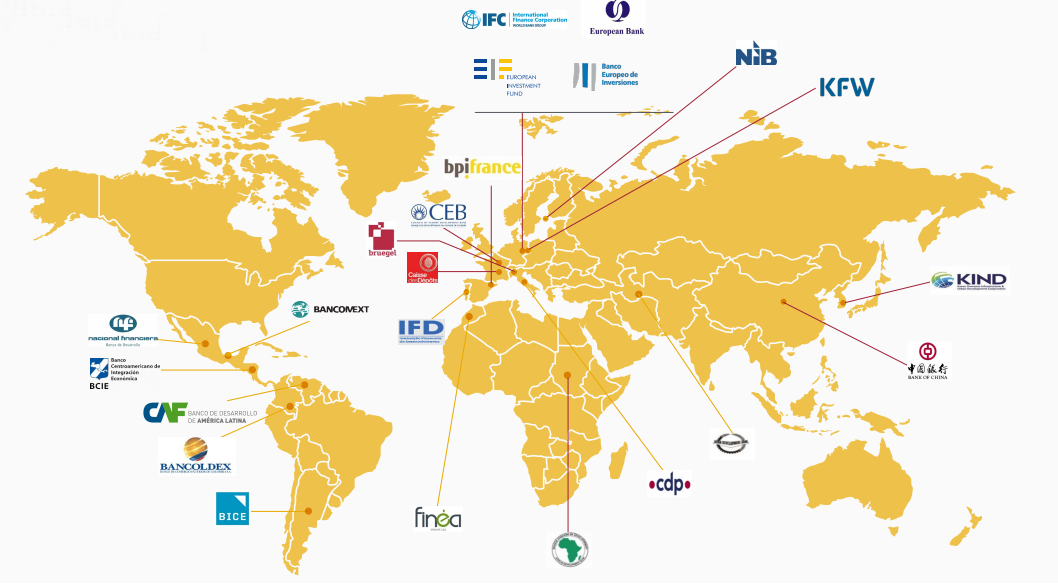 A network made up of 17 financial institutions of the European Union, that share a public mission to provide SMEs with access to funding by offering them financial services and expertise, as an addition to and in co-operation with the national banking system.

Association launched in July 2013 that replaced the old ISLTC Club (Institutions of the European Union Specializing in Long-Term Credit). Its aim was to strengthen the cooperation between member institutions, and to join forces to promote and foster long term financing, in line with EU objectives and initiatives. It is comprised of 16 financial institutions based in the European Union, including the BEI.

The LTIC is composed of a total of 19 global financial institutions and investors committed to supporting the large financial investments necessary for sustainable economic growth, both on the national and multilateral level. Launched in 2009 by the four major European financial institutions: Caisse de Dépôts, Cassa depositi e prestiti, BEI and KfW, representing a combined balance sheet total of 4.6 billion dollars, a figure that makes it one of the largest investor platforms in the world.

An association with over 80 active members in Latin America, the Caribbean and in countries outside of the region such as Germany, Canada, China, Spain, Portugal, Sweden and Russia. Its primary aim is to contribute to the economic and social development of the region, through best financial practices it encourages amongst its associates.

The relationship between these institutions is intended to provide funding for investment projects carried out by Spanish small and medium-sized enterprises. Until now this co-operation has involved signing global loans destined for funding SMEs. The total amount of EIB funding is supplemented by a payment of the same amount by ICO, which has meant a considerable financial injection into the Spanish economy over the last few years and adds to the other ways the EIB has collaborated with ICO since 1986.

As the EU body that provides securities and venture capital to SMEs, ICO co-operates closely and often with the EIF, mainly through its venture capital subsidiary AXIS, with ICO also being a shareholder in the Fund since it was set up in 1994.

ICO and CAF undertake strategic co-operation activities in order to promote financial and credit development, as well as technical and economic co-operation between the countries of the Andean Region and Spain.

ICO and KfW have a staff exchange collaboration agreement which serves for personnel to get to know the working procedures of both organisations, to improve institutional relations in each specific activity area and to broaden experience for the common good.

In order to strengthen their relationship, ICO and JBIC have signed a Collaboration Agreement that reflects the desire of both institutions to explore possible programs and projects that improve institutional relationships and mutual understanding, especially the cofinancing of investment projects which benefit Spanish and Japanese companies in Spain and abroad and the exchange of knowledge and personnel.

In order to strengthen the relationship between ICO and BNDES, the two institutions have signed a Collaboration Agreement that contains the main joint initiatives they intend to pursue. Most notable among these initiatives are information exchanges and the financing and support of Spanish and Brazilian SMEs and the cofinancing of investment projects.

Collaboration agreement for establishing a co-operation framework between both institutions for temporary staff exchanges.

ICO and the Mexican Bancomext are involved in co-operation activities to promote financial and credit development between Spain and Mexico.

An agreement was signed with this Bulgarian development bank with the aim of encouraging investments between Spain and Bulgaria, through the exchange of information and joint financing of investments of mutual interest.

Co-operation through an agreement intended to strengthen the capacity of Spanish and Tunisian companies to invest abroad, thereby achieving a growing economic integration between the two countries and more growth in their domestic economies.

With the purpose of strengthening bilateral economic relations between Spain and Russia and developing trade and investment between the two countries, ICO and the Russian Development bank signed a co-operation agreement for facilitating information exchange and co-operation in financing companies.

A co-operation agreement was signed with the object of promoting investment opportunities in Spain and India, which provides for the possibility of exchanging information about future investments, promoting the establishment of mixed companies and also organising seminars which would help to achieve these aforementioned objectives.

A collaboration agreement was signed with SEK in order to bring about greater economic integration between Spain and Sweden. The purpose of this agreement is to promote foreign investments by Spanish and Swedish companies by exchanging information about investment projects.

CDG is a financial institution that is a major player in the Morrocan economy and a partner in public development policies. With the aim of strengthening relations between ICO and CDG, a Partnership Agreement has been negotiated which covers the main cooperation initiatives under consideration for development. These include the exchange of information, financing and support for Spanish and Moroccan SMEs and the co-financing of investment projects.

NAFIN is the development banking institution of the Mexican government, whose objectives are to contribute to regional development and to create jobs. The Partnership Agreement reflects the desire of both institutions to promote programmes and projects that encourage mutual cooperation including the financing and co-financing of Spanish and Mexican companies and of common-interest projects.

COFIDE is a mixed company majority owned by the Republic of Peru whose mission is to play an active role in the country's sustainable and inclusive development through the financing of investment. The agreement covers the main cooperation initiatives under consideration for development including the exchange of information, financing and support for Spanish and Peruvian companies and the co-financing of investment projects.