ICO: benchmark issuer in the market for sustainable bonds

One of the key instruments in the Instituto de Crédito Oficial's sustainability strategy is the issuance of sustainable bonds, whose purpose is to promote the financing of projects that respect the environment and provide social benefit to people. In this sense, sustainable debt issuance makes a distinction between two types of bonds: Social Bonds and Green Bonds.

In 2015, ICO began its journey as a sustainable issuer, and it was then that the first ICO Social Bond was launched. At a time when there were still no specific guidelines for sustainable bonds on the market, the Institute focused its objective on the letter "S" of the so-called ESG criteria (Environmental, Social and Corporate Governance) and opted for attracting funds to act in regions of Spain with a per capita income below the national average by financing projects carried out by the self-employed and SMEs.

This first social bond issue has been followed by seven more to date, and ICO has not only been a pioneer but has also remained from the outset one of the key issuers in the sustainable finance sector, launching at least one social bond issue every year to finance operations that generate a positive social impact. The latest ICO Social Bond was issued in September 2022, maturing in January 2028 and worth 500 million Euros which, added to the total social debt issued, amounts to 4,050 million Euros placed with investors from all over the world.

Taking stock of the first Social Bonds issued by ICO, of which the reporting of 7 has been published, the funds raised have financed 64,200 projects with an estimated impact of 406,600 jobs.

In April 2020, ICO updated its Social Bonds Framework. As in the previous 2015 report, Sustainalytics (a global leader in ESG research and data) certified that the framework was aligned with the ICMA (International Capital Markets Association) Social Bond Principles, the leading industry standard. This update enabled it to launch the first public issue in Spain of a COVID-19 Social Bond. With this new framework, ICO can allocate the funds it raises through the issuance of Social Bonds to projects with a positive impact on employment, that promote economic and territorial cohesion, the construction of social housing or that are developed in the field of education and health, among others. 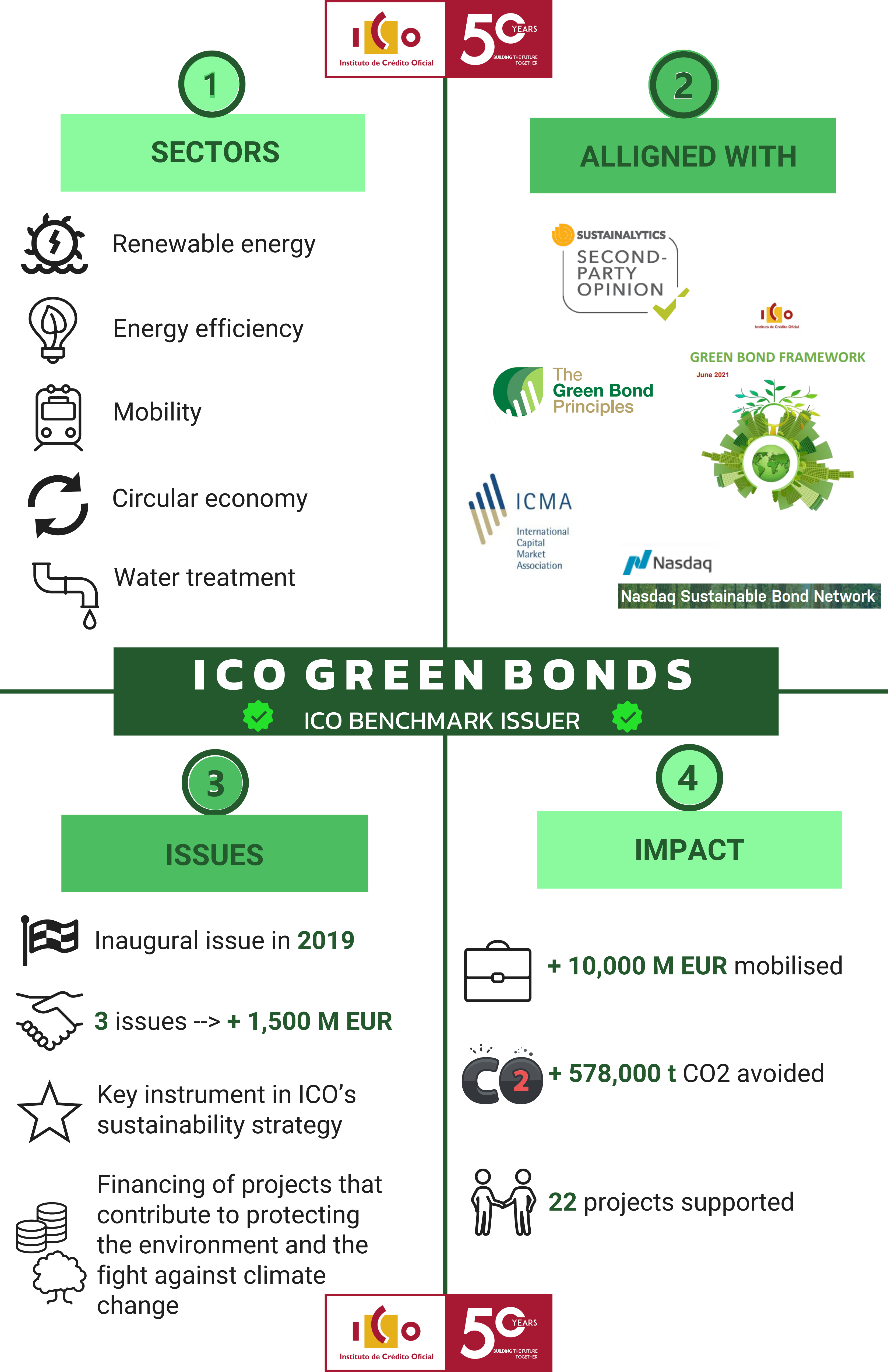 In 2019, ICO made its début in the Green Bond  market, a category of sustainable debt that reflects the Institute's commitment to the environment and the fight against climate change through the financing of projects aimed at these ends.

The framework includes different categories, aligned with the SDGs (Sustainable Development Goals) towards which to direct funds raised from emissions: renewable energy, clean transport, energy efficiency, sustainable management of natural resources or pollution control, among others.

So far, the ICO has launched 4 Green Bond issues worth 2 billion Euros and has published information on the destination of the funds and the estimated impact of the first three. The proceeds of these first three green bonds, issued between  2019 and 2021, have been used to finance  30 projects with an estimated saving of more than 692,000 tonnes of CO2 and mobilising funds in excess of 12 billion Euros.

The funds raised through sustainable debt are used to finance public-private partnership projects through the various instruments available to ICO, such as the ICO Lines, direct financing programmes and the funds managed by AXIS, ICO's venture capital subsidiary.
Furthermore, with ICO's issuance of social and green bonds and its consequent promotion of projects that generate a positive social and environmental impact, ICO's commitment extends to working in line with the objectives set out in the Recovery, Transformation and Resilience Plan.