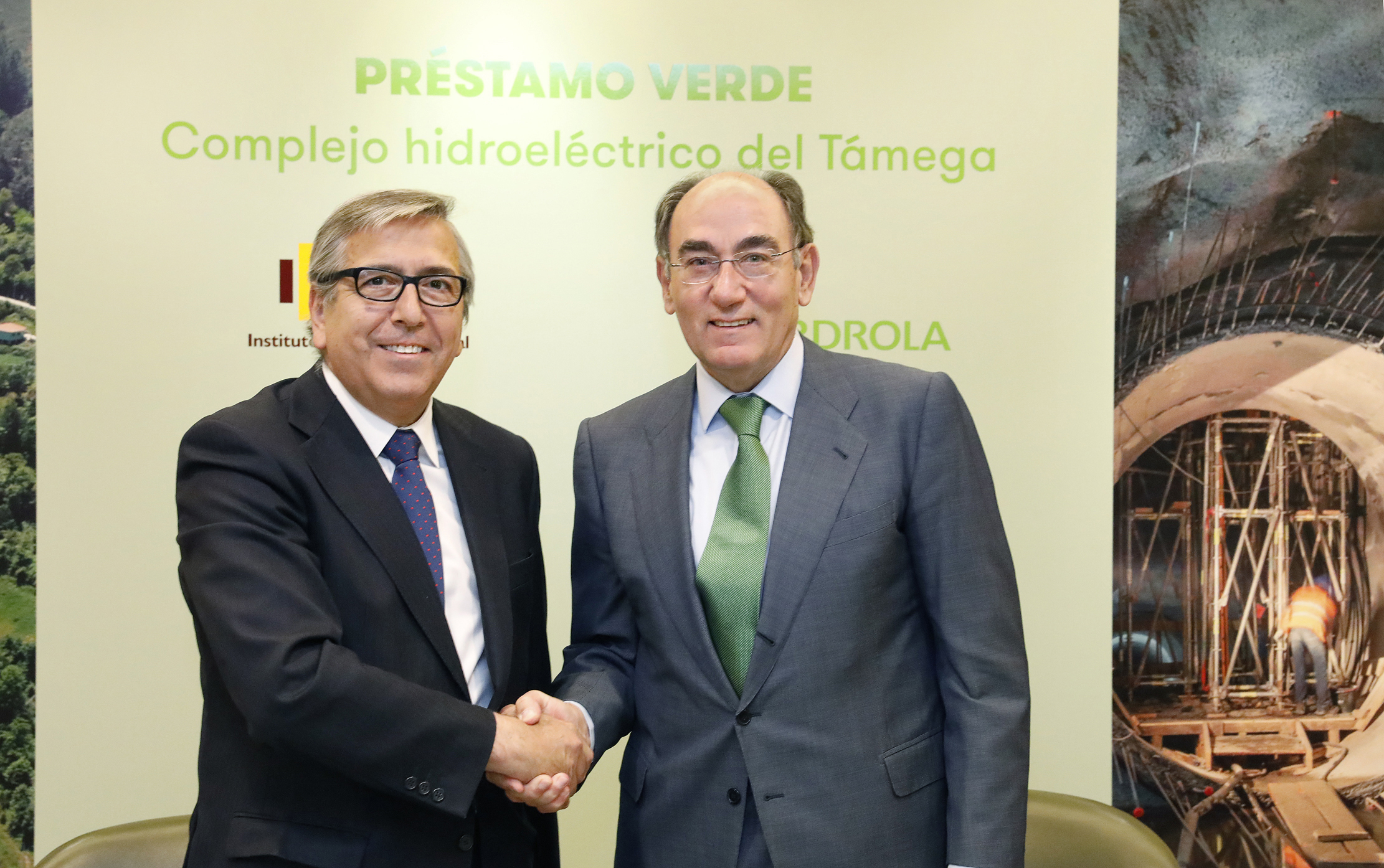 Iberdrola has obtained the largest green loan ever granted by the Instituto de Crédito Oficial (ICO), amounting to 400 million euros and a 12-year repayment period with two years grace period for repayment of principal. The operation was signed this morning by the company's chairman, Ignacio Galán, and the ICO's chairman, José Carlos García de Quevedo, during a meeting held at Iberdrola's corporate offices in Madrid.

The loan acquires its green status because the funds obtained will be allocated to the Támega hydroelectric storage complex, which the company is currently building in northern Portugal. This project includes the construction of three new plants with a total capacity of 1,158 megawatts (MW), which will increase Portugal's total electrical power by 6% and will enable the supply of renewable energy to 440,000 households. Of this capacity, 880 MW will be a pumped system, the most efficient energy storage system to date, which facilitates the integration of renewables into the peninsular electricity system and its sustainability.

The Támega project also entails an important socio-cultural and environmental action plan, endowed with 50 million euros and developed in collaboration with the different municipal councils of the region. The objective of this plan is to contribute to the development of the area and to the improvement of the living conditions of its population¿it is estimated that 3,500 direct jobs and 10,000 indirect jobs will be generated during the construction of the hydroelectric complex¿as well as to protect the surroundings of the project from an environmental point of view.


lso noteworthy within the framework of this programme is the project for the recovery of the Roman gold mine in Tresminas. With an investment of 1.84 million euros, Iberdrola collaborates with the Municipal Council of Vila Pouca de Aguiar and the Regional Direction of Culture of Northern Portugal in the promotion of the historical, patrimonial and archaeological heritage of the region.

For the certification as a green loan, an independent opinion was obtained from the VigeoEiris agency, which has verified that the project to be financed follows the Green Loan Principles. In its certification, VigeoEiris also evaluates Iberdrola as a company as a whole in terms of ESG (environmental, social and governance performance).

Iberdrola continues to advance in the development of its large portfolio of renewable projects, to which it will allocate 13.3 billion euros over the period 2018-2022. In line with its leadership in clean energy and its commitment to a low-carbon energy model, Iberdrola has an ever-increasing percentage of its green financing sources, both at the group level and in some of its subsidiaries. AVANGRID, for example, which is listed on the New York Stock Exchange and of which Iberdrola controls 81.5%, has already successfully closed the placement of two bonds in this format.

After being the first Spanish company to close a green bond in April 2014, Iberdrola has become the largest issuer of this type of bonds at company level in the world and the total amount of its green bonds issued already exceeds 9,500 million euros.

The company has also been a pioneer in taking out green loans: in February 2017 it signed the first green loan with BBVA for an energy company and in April 2018, in Mexico, the first operation of this type carried out in Latin America, for amounts of 500 million euros and 400 million dollars, respectively.

In addition, Iberdrola, together with a syndicate of banks, reconfigured several lines of credit at the beginning of 2018 amounting to 5.3 billion euros, in which the margin was subject, among other aspects, to the company's performance in various criteria within the area of sustainability. Last March, the group closed another transaction of this nature for an amount of 1,500 million euros. AVANGRID also signed last summer its first green credit line for 2,500 million dollars.

This financing strategy is also in line with Iberdrola's commitment to meeting the Sustainable Development Goals (SDS) of the United Nations Agenda 2030.

In line with its activity, the group focuses its effort on the supply of affordable and clean energy (objective 7) and climate action (objective 13). In addition, it contributes directly to ensuring clean water and sanitation (objective 6), has increased its investment in R&D&i activities (objective 9), promotes respect for the life of land ecosystems (objective 15) and works to establish partnerships to achieve the objectives (objective 17). The company also contributes indirectly to the rest of the ODS.

The operation signed today strengthens the Instituto de Crédito Oficial's commitment to meeting the Sustainable Development Objectives of the 2030 Agenda. The ODS are especially relevant in an institution such as ICO, whose main function is to promote economic activities that promote sustainable economic growth and the generation of employment.

As part of its global strategy, the ICO Group has included sustainability criteria in the development of its activity. In this regard, it is worth highlighting the recent launch of the ICO's first green bond issue amounting to 500 million euros, which will be used to finance activities, investments and projects by Spanish companies that contribute to environmental protection and the fight against climate change.

In addition to being a leading issuer and catalyst for the transition of the financial and venture capital sectors towards sustainable economic development, ICO promotes sustainability as a structuring and transversal axis in all its facets and as an essential part of Corporate Social Responsibility policies.

Iberdrola is a global energy leader, the world's leading wind power producer and one of the world's largest electricity companies in terms of market capitalisation. The group supplies energy to nearly 100 million people in dozens of countries such as Spain, United Kingdom (ScottishPower), United States (AVANGRID), Brazil (Neoenergia), Mexico, Germany, Portugal, Italy and France. With a workforce of some 34,000 people and assets in excess of 113,000 million euros, it had a turnover of 35,075.9 million euros and a net profit of 3,014 million euros in 2018.

Iberdrola leads the energy transition towards a sustainable model through its investments in renewable energies, smart grids, large-scale energy storage and digital transformation to offer the most advanced products and services to its customers. Thanks to its commitment to clean energy, it is one of the companies with the lowest emissions and an international benchmark for its contribution to the fight against climate change and sustainability.

The Instituto de Crédito Oficial (ICO) is a public business entity attached to the Ministry of Economy and Business of the Spanish Government. ICO has become a benchmark in the financing of both SMEs and large investment projects. ICO contributes to business growth and the generation of employment, promoting those economic activities which, due to their social, cultural, innovative or ecological importance, deserve promotion and development.