Seville increases its social housing with EIB and ICO funding

The European Investment Bank (EIB) and the Official Credit Institute (ICO) will facilitate flexible and attractive financing, both in terms of interest types and repayment terms, to expand the availability of social rental housing in Seville. More specifically, each organisation will provide 40 million euros to Seville's Municipal Housing, Land and Equipment Company (EMVISESA), which will use this to build 562 social rental housing at affordable prices. The investments will also promote urban regeneration in certain areas of the city.

The agreement was signed today, in Seville, by the city's mayor Juan Espadas, EIB vice-president Emma Navarro, and the ICO's chairman José Carlos García de Quevedo. The EIB provides this funding under the framework of the Investment Plan for Europe. 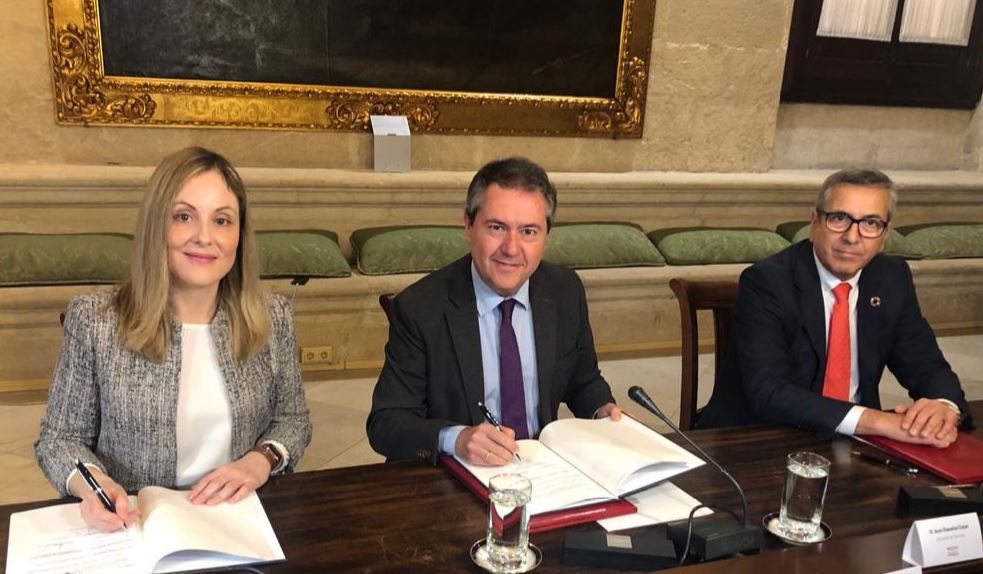 In January 2019, the Seville City Council adopted its new municipal housing plan with an intervention model of housing based on five key points: the construction of new developments with sustainability and energy efficiency criteria, rehabilitation, the purchase and rental of empty properties, agreements with the private sector for the development of affordable rental programmes in the city (particularly in relation to the younger population) and commitment to new formulas for social innovation as collaborative accommodation or housing cooperatives. The goal is to reach 3,000 total homes in the city over the next five years.

The project, which is funded by the EIB and the ICO and was signed today, includes 8 new developments and the rehabilitation of two others. The new homes will be distributed across different neighbourhoods in Seville and, as a whole, will add up to a total surface area of over 41,000 square meters. The new homes, which will benefit around 1,000 people, will be aimed at low income groups and groups that are especially vulnerable, such as single-parent households and victims of gender-based violence, among others.

The average size of the accommodation will be approximately 70 square metres, and they can be rented for an average price of 290 euros. According to EMVISESA estimates, the project will create 700 jobs during the implementation phase, over the next three years.

On the other hand, the ICO will provide 9.2 million euros of additional funding for the acquisition of 150 housing units within the programme to acquire EMVISESA's empty homes, in order to incorporate them into the available public housing and to promote the most underprivileged groups access to housing.  In this way, the transactions signed today will increase Seville's rentable social housing to 700 housing units.

In the signing ceremony held in Seville, EIB vice-president Emma Navarro, head of the Bank's activity in the country, stated: "One of the EU bank's major goals is to promote social cohesion. For over 60 years, the EIB has worked to promote inclusive growth and to improve citizens' quality of life. That is why we are very pleased to sign this agreement with the Seville City Council, which will make it easier for Andalusian families with lower incomes to access social housing and will allow the comprehensive reconstruction of some areas of the city, while simultaneously contributing to the creation of employment in the region.

Speaking about the agreement, European  Commissioner for the Economy Paolo Gentiloni, stated: "I am delighted that the European Union is supporting a social project of major significance in Spain. Thanks to the funding agreement signed today, Seville will have 562 new social housing units at affordable prices, destined for especially vulnerable groups. In addition, the construction of these homes will create about 700 jobs."

For his part, ICO chairman José Carlos García de Quevedo, highlighted: "The ICO Group has incorporated sustainability as a key theme in its activity in its various aspects: environmental, social and governance to promote sustainable economic growth. There is no doubt that participation in financing projects like the one we signed today, which will allow us to offer better housing options to the most vulnerable groups in society, constitutes an important step in this line of action".

"Seville's new municipal plan for housing, which is possible thanks to the first major funding agreement with the EIB and the ICO in the history of the Seville City Hall, is carried out within a model of the city that commits to social transformation, sustainability and equality of opportunity. A model defined in Seville's 2030 Strategic Plan and in the city's commitment to the United Nations¿ Sustainable Development Goals.  This great financing agreement and the new municipal plan have thus made Seville a reference point in terms of its commitment to public housing, giving social responses that are adapted to our citizens' different needs and circumstances realities," explained Juan Espadas, Mayor of Seville.

The Investment Plan for Europe, known as the «Juncker Plan», is one of the European Commission's key priorities. It focuses on promoting investment to create jobs and growth through more intelligent use of financial resources, eliminating barriers on investment and providing visibility and technical assistance to investment projects.

The European Fund for Strategic Investments (EFSI) is the main basis of the Juncker Plan. It provides first loss guarantees, which enable the EIB to invest in a larger number of projects that often involve greater risks. The projects and agreements approved for funding under the EFSI are estimated to mobilise over 462,700 million in investment, including 49,800 million euros in Spain, to support over 1 million start-ups and SMEs in the 28 member states. The investments supported by the Juncker Plan have increased the EU's gross domestic product by 0.9% and have created 1.1 million additional jobs compared to the baseline scenario. For 2022, the Juncker Plan will have increased the EU¿s GDP by 1.8% and created 1.7 million additional jobs.

The Instituto de Crédito Oficial (Official Credit Institute - ICO) is a public business entity attached to the Ministry of Economic and Digital Transformation Affairs. The ICO has become a benchmark in the financing of both SMEs and large investment projects. The ICO contributes to inclusive and sustainable growth, promoting those economic activities that, due to their social, cultural, innovative or ecological importance, deserve promotion and development.